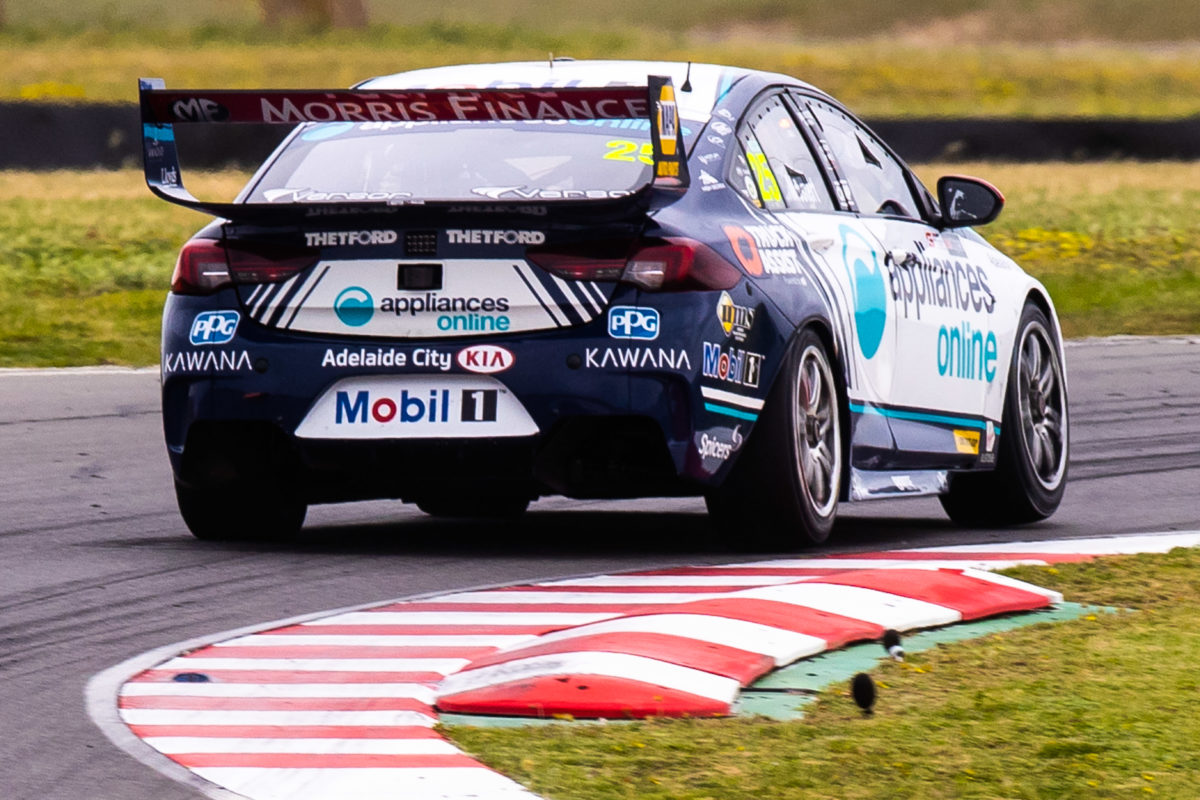 The Adelaide City Kia branding on Walkinshaw Andretti United’s cars at The Bend is not related to talks with potential new manufacturers, Team Principal Bruce Stewart has explained.

WAU’s two Holdens sported the new signage on their front guards and rear bars at the Repco SuperSprint The Bend, a month on from Director Ryan Walkinshaw’s revelation that his team is in talks with two manufacturers about entering the Virgin Australia Supercars Championship.

An updated version of Kia’s sporty Stinger sedan is on its way to Australia by year’s end, while Holden’s days in the Supercars Championship are numbered due to General Motors’ decision to retire the marque and the Gen3 era which is set to take effect in 2022.

However, the appearance of the Korean manufacturer’s logos on two ZB Commodores is in fact the choice of the motor dealer which will put up WAU while it works away from its usual base between the two Tailem Bend events and next month’s season-ending Supercheap Auto Bathurst 1000.

Given that the Victoria-New South Wales border remains closed, the team which calls the Melbourne suburb of Clayton home will set up in one of the City Motor Group’s facilities in the South Australian capital before heading directly to Bathurst.

Trading as City Holden, the family-owned business was a sole dealership until it took on Kia and LDV in recent months in response to the GM decision.

It will also sell cars from the General Motors Specialty Vehicles brand which is a new partnership between Walkinshaw Automotive Group and the American manufacturer.

Asked what should be made of the Adelaide City Kia logos, Stewart told Speedcafe.com, “I wouldn’t make anything of it at all.

“I would say that City Motor Group have various dealerships and they’re looking after us and assisting us.

“In that respect, by giving them some signage, it’s exclusively around them looking after us and the preparation for Bathurst; nothing more, nothing less.

“We have a great relationship with the dealer so he’s kindly facilitating us on their property and we’re all driving around with Holden cars for the next few days, and Holdens and HSVs for the four weeks we’re in Adelaide, so (we) love their support.

“Because we’re doing it with the dealer, we asked him what he wanted to have on the car.

“He’s looking after us so well and that’s his call, and we’re happy to abide.”

The Walkinshaw family has worked with various manufacturers over a period of decades, including Tom Walkinshaw Racing’s 1985 Bathurst 1000 victory with Jaguar.

Ryan Walkinshaw told Fox Sports’ Loud Pedal podcast in August that “We’ve now got new negotiations ongoing with a couple of new manufacturers,” which he described as encouraging, but would not be drawn on the identities of those manufacturers.

Kia has already been linked to Supercars and team owner-driver turned part-time pundit Paul Morris believes that the category would be a favourable marketing platform for the Stinger.

“You’d have to speak to Ryan about that,” replied Stewart when the coincidence of the aforementioned interview was put to him.

However, questions about the implications of the branding on the Chaz Mostert and Bryce Fullwood cars had been anticipated.

“Let me just be completely upfront; the branding on the car is exclusively about the dealer and the dealership and nothing to do with a manufacturer at all,” added Stewart.

“It’s about supporting City Motor Group and that’s the brand they wanted to put on the car.

“We thought it might elicit conversations like this but that’s what it’s about; it’s specifically about the dealership and the brand he wanted to promote.”

Some Melbourne-based teams may return to their temporary set-ups in South East Queensland between this coming weekend’s OTR SuperSprint The Bend before heading to Bathurst, with Team 18 expected to again work from Ross Stone Racing’s Gold Coast workshop.

The relative freedom of movement between South Australia and Queensland does, however, afford it the opportunity to potentially field Kurt Kostecki in this weekend’s Rookie Practice session.

The West Australian native normally lives in the Sunshine State nowadays and will make his Bathurst 1000 debut as co-driver to Fullwood, meaning he is eligible for that 20-minute hit-out at The Bend.

Broc Feeney (Tickford Racing), Thomas Randle (Brad Jones Racing), and Brodie Kostecki (Erebus Motorsport), have been confirmed as participants, while WAU is “still looking” at the prospect of Kurt Kostecki joining them.

The 2019 Super2 runner-up does have recent Supercars mileage having notched up a day of testing in a VF Commodore at Queensland Raceway last week under the eye of Mostert’s co-driver, Warren Luff.

A second event at The Bend, on the West Circuit layout, kicks off this Saturday before the Supercheap Auto Bathurst 1000 commences on Thursday, October 15. 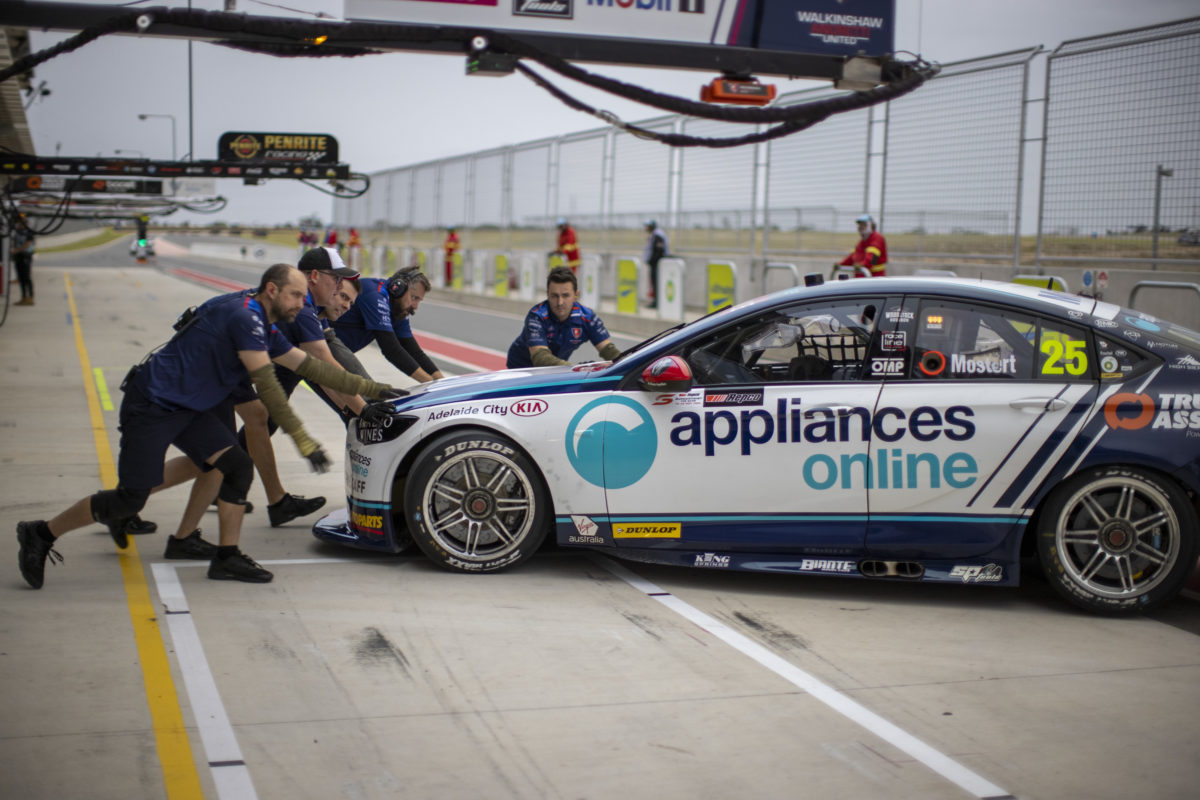 In Cambria, marketing and a corn maze meet | Local News

Fri Sep 25 , 2020
The Cambria Corn Maze this year features Evans Bank’s logo.  Provided photo When Leanna Ohol saw the special logo Evans Bank created for its 100th anniversary, she had a reaction others didn’t: That would make a great corn maze. After planning and planting, the bank’s logo has appeared inside a […]