(Illustration by iStock/rudall30) I have served on several nonprofit boards of directors and written two books about those and other leadership experiences. I’ve learned that building and sustaining high-functioning governing bodies is arduous, time-consuming work, but it’s worth the effort. Run well, they can bolster an organization’s revenues, provide access […] 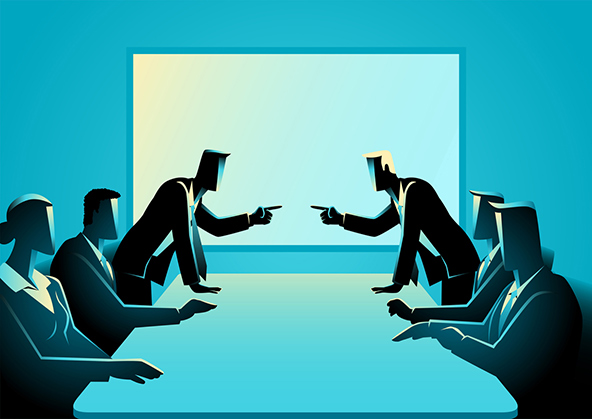 I have served on several nonprofit boards of directors and written two books about those and other leadership experiences. I’ve learned that building and sustaining high-functioning governing bodies is arduous, time-consuming work, but it’s worth the effort. Run well, they can bolster an organization’s revenues, provide access to influential figures, inspire confidence in stakeholders, help manage risks, improve leaders’ performance, and contribute to the crafting of a compelling mission and strategy.

Sadly, many nonprofit boards miss out on these benefits and are more or less dysfunctional, based on a 2014 report by the Urban Institute and my three decades of work in the field. It’s a topic that management literature has little to say about. People usually don’t like to draw attention to the fact that they were part of such a group. One of the rare case studies, “Should It Survive? Charles Dunlap and the National Legal Foundation,” focuses on an organization that no longer exists, which may have freed those involved to talk openly.

To help fill the gap, I wrote in detail about an example of a weak board that I unsuccessfully tried to reform and from which I was ultimately forced to resign. That recounting complements this article in order to take on the challenging issue of board dysfunction. I’ve found that drawing on my personal experience is tricky—it can hurt important relationships if done carelessly—but necessary, given the dearth of information.

In my 30 years of experience, I have observed three main types of unsuccessful nonprofit governing bodies:

There are many variations of these three models, including hybrids. I once served on a board where a small subset of the group micromanaged the staff, while everyone else served as a rubber stamp. Organizations with strong brands or leaders can do reasonably well for a while working under one of these types. But once a crisis strikes, the accumulated rot begins to seriously hamper a nonprofit’s effectiveness.

I suspect many nonprofits with weak boards are now suffering in the mayhem wrought by the pandemic. One nonprofit leader recently told me that her governing body, which included many retirees and tended towards being a rubber stamp prior to COVID-19, had suddenly decided it wanted to appear to be “doing something” without much of an idea about how to genuinely contribute. As a result, many unnecessary meetings were held. She jokingly called it a case of a “bored board.”

Lack of diversity often compounds dysfunction. Homogeneity can lead to groupthink, myopia, and a board culture that alienates people who could otherwise help improve the organization. Ethnic, racial, and gender diversity are important. It is also healthy to have a heterogeneous governing body in terms of wealth, professions, work style, expertise, political ideology, location, and religious faith (or lack thereof). Including people directly impacted by the societal problem an organization seeks to address—such as having a current or former homeless person on the governing body of a shelter—is another powerful, though sometimes difficult, strategy to diversify and improve a board.

Once a board becomes dysfunctional, turning it around requires immense effort and patience. The usual remedies—self-evaluation, external review, a retreat, term limits, and recruitment of new members—are often ineffectual or lead to improvements that are difficult to sustain. It takes far more to get a rubber stamp board to assert itself, to persuade a micromanaging board to back off, or to inspire all members of a Balkanized board to care about the entire organization.

It’s much easier to notice red flags early and nip problems in the bud. Here are a few examples of nascent board dysfunction and how to deal with them:

1. Misplaced Loyalty | Board members’ first and highest loyalty must be to the organization and its mission. While this sounds obvious, it is not always the case. I once took part in a board retreat where, in the opening session, most members made expressions of loyalty to the founder and the executive director (ED) the centerpiece of their self-introductions. All I could think was: If their loyalty to these two individuals is greater than to the organization’s mission, God help us if those two things come into conflict at some point. (For example, if the founder or ED proposed a well-intentioned but highly risky idea.) Not surprisingly, this board devolved into chaos in a matter of days when two members were marginalized after asking hard questions about strategy, mission, and culture that the ED considered inappropriate. I am not suggesting that board members stop behaving sensitively or even deferentially to those who have labored to build an organization, often at great personal sacrifice, and also to those who recruited them. But once a board member becomes informed enough to have defensible positions on organizational matters, she has an obligation to advocate for her views on the nonprofit’s best interests, no matter whom they might offend. For example, a board I once served on had a single member abstain when it came time to vote on appointing a new ED. This led to some consternation and hand-wringing about disunity in the short term, but it prompted the chairperson to monitor the new ED closely for the first year based on the abstaining member’s concerns. This turned out to be a good thing—it ensured the board’s help with gaps in the new leader’s experience and, early in his tenure, led to the hiring of a strong deputy with complementary skills.

2. Usurping Management Functions | Board members who volunteer to work alongside professional staff can amplify a nonprofit’s work and gain a deeper understanding of the organization. But when this devolves into them bossing the staff around, making decisions on the staff’s behalf, and providing the board negative evaluations of employees based on potentially brief glimpses of their work, it can create a toxic environment and lead to team members becoming passive, secretive, or demoralized. Board members who are used to being decision makers and leaders in their regular jobs are especially prone to acting as if they are or should be in charge. I once ran an organization where the staff told me that they had two bosses—their direct supervisor and a board member who took an interest in their role. To avoid creating such confusion, board members need to understand that when they reach out to work with the staff, they are volunteers who happen to be board members rather than board members there to supervise anyone or order people around. Their role is to help, advise, and learn. There should also be limits on what directors can tell the board about what they learn while volunteering.

3. Unexamined Performance | If you serve on a board and have no idea how others view your participation, and have no means of giving feedback about the prevailing culture, expect trouble. Undiscussed differences in opinion between board members can gestate into deep resentments that trigger a crisis or drive people away. Preventing this requires regular feedback and candid communication. One way this can be done is to form a small group composed of the board chairperson, the CEO, the general counsel, and the chair of the governance committee, or some other person with the requisite stature and judgment. The group should meet every six to 12 months to assess each director’s performance and then assign a representative to provide the feedback. As I argue in my book Changing the World Without Losing Your Mind, following this approach diligently can obviate the need to impose term limits. Board members who are perceived as retaining their seats without contributing much effort or value are told as much; as a result, they usually raise their level of involvement or step down, regardless of how long they have been serving.

4. Stifled Dissent | Minority views and skepticism should be welcomed around the board table, with all members encouraged to speak their minds and vote their consciences, even if this creates tension. Passionate debate and non-unanimous votes are a signal of a strong, not weak, governing body. Groups with members who argue like they are right but listen like they are wrong tend, in my experience, to make the best decisions. They also minimize the risk of driving away useful and critical dissent. I have seen board leaders commend naysayers for their thought-provoking comments, thus encouraging everyone in the group to engage in critical thinking about organizational matters without fear of harsh judgments or reprisals. When boards are encouraged to pay close attention and express skepticism as appropriate, those preparing proposals that require approval of the governing body are apt to prepare assiduously before seeking a green light to move forward. I have also been on boards where asking hard questions about program effectiveness, financial management, organizational theories of change, and CEO performance is met with disapproval, silence, or even marginalization. As a result, such organizations are prone to approving half-baked budgets and strategies, and are less equipped to respond to problems.

5. Tolerating Misbehavior | More than once I have observed people behave unprofessionally and even unethically around a nonprofit board table in ways that I doubt those same people would ever do in a business setting. I have seen directors berate staff members for lacking detailed answers to their questions, ignore or minimize obvious conflicts of interest (such as companies owned by directors doing business with the organization), disregard people’s novel solutions because acknowledging them would highlight a problem that the group wanted to ignore, and change the subject during a formal meeting instead of making a crucial decision.

In extreme cases, such poor behaviors can lead to widespread dissension, mass or forced resignations, and other unpleasantness. Confronting these situations is challenging, but turning a blind eye only normalizes and reinforces unprofessional actions. I once met with a former board chairperson and major donor to discuss his many comments about the performance of the mostly minority staff members, who viewed his statements as harshly critical. Our conversation was uncomfortable, especially because this person had been a mentor and benefactor of mine for years, but it caused him to change his ways to some degree.

6. Accepting Balkanization | Board members can bolster organizations by overseeing parts of them in which they have special interest or expertise, but they should not ignore the rest of what the nonprofit does. If they do, they may advocate only for their pet projects or disparage other undertakings that appear to compete for attention or resources. Serving on a governing body—unlike being a donor or volunteer—demands the embrace of all parts of an organization, an approach that cannot be left to just the executive director. Otherwise, the board will devolve into competing camps that disrupt organizational cohesion and a rational setting of priorities. In fact, board members should be prepared to argue against their favored programs if they don’t make strategic sense so as to avoid turning an organization into a collection of projects.

Healthy boards of directors can magnify mission-driven organizations’ positive impact on social progress, but they are more of an exception than a norm. Given the multiple crises facing our world—from COVID-19 to climate change—this must change to help achieve the solutions we need. It’s more important than ever that every governing body regularly assesses its performance, goes outside its comfort zones, embodies professional standards, and puts the success of an organization as a whole above anything else.

Wed Oct 7 , 2020
Turning Point Brands, Inc. (“TPB”) (NYSE: TPB), a manufacturer, marketer and distributor of branded consumer products with active ingredients, today announced that it has acquired a 20% stake in Wild Hempettes LLC (“Wild Hempettes”), a leading manufacturer of hemp cigarettes under the WildHemp™ and Hempettes™ brands, with options to […]