Embracing an era of socioeconomic change has challenged the 117-year-old Piedmont Federal Savings Bank to conduct a self-evaluation of its role in the financial-services sector and the communities it serves. The Winston-Salem bank launched last week what it calls a GPS Banker Development program — a yearlong, multi-faceted management-training initiative […]

Embracing an era of socioeconomic change has challenged the 117-year-old Piedmont Federal Savings Bank to conduct a self-evaluation of its role in the financial-services sector and the communities it serves.

The Winston-Salem bank launched last week what it calls a GPS Banker Development program — a yearlong, multi-faceted management-training initiative for new bankers. A principal goal is attracting more minorities into the banking industry. The bank is specifically recruiting business students from historically Black colleges and universities, said David Barksdale, who completes on Wednesday his first year as Piedmont’s chief executive.

It is starting small with just two recruits.

“If I were to try to hire a banking manager within my current network, there’s a high likelihood it would be a white person,” Barksdale said.

“You’ve got to take an intentional step to seek out and hire people of color. It’s the right thing to do.

“Our employee base, over time, should reflect the demographics of the communities we serve,” Barksdale said. “It will take us a while to get there, but over time that’s what we’re working toward.”

Although the first two recruits — Cameron Berry and Jamarkus Swinson — are recent N.C. A&T State University graduates, the bank plans to attract business majors from Winston-Salem State University, Bennett College and other HBCUs in the state and Southeast.

Barksdale said Piedmont has hired a Hispanic female banker who came from another financial institution as part of its cultural diversity initiative.

Both have been pledged full-time employment following completion of the program.

“The number of our African American neighbors who are employed by us, or choose us as their financial services partner, is simply not as high as we believe it could or should be,” Barksdale said.

“We want to change that — doing nothing is not acceptable.”

The program will provide Berry and Swinson an immersion into Piedmont’s culture of banking principles, operations, accounting, technology, management and leadership.

The goal is to build on their strengths “in an intensive training program to accelerate their careers, preparing them for advanced positions and future leadership roles with Piedmont Federal,” according to the bank.

“This is a version of an old management-training program a lot of us went through in the 1980s and 1990s,” Barksdale said.

Barksdale said the program also is representative of how Piedmont continues to evolve in terms of outreach, and in finding and applying new ways to remain relevant as a $900 million bank in a constantly consolidating industry.

“This will not be a one-and-done initiative,” Barksdale said.

“We want it to be part of the fabric of Piedmont Federal,” he said.

Allen Suttle, Piedmont’s director of business banking, said the bank was fortunate to have come across Berry and Swinson through its connections with N.C. A&T, particularly Chancellor Harold Martin Sr.

Martin serves on Piedmont’s board, while Barksdale served for six years on A&T’s Board of Visitors while a senior executive with NewBridge Bancorp.

“AT&T was a natural first stop for us,” Barksdale said.

Berry said he was surprised and honored to have been chosen as one of the two initial participants.

Berry had some hereditary on his side, being the grandson of Harold Holmes, former dean of students at Wake Forest University and a human-relations officer with legacy Wachovia Corp. before Wachovia was sold in 2001 to First Union Corp. Barksdale said he has served on nonprofit boards with Holmes.

“I’ve always liked working with numbers my whole life, and going into business and banking just make good sense to me,” Berry said.

Settle said that after looking over Berry’s resume, “I told David that ‘he would be a perfect candidate’ for what we’re looking for.”

“Having just graduated in the midst of a pandemic, I really appreciate this opportunity and believe it will serve as a foundation for my banking career,” Berry said.

Swinson said the pandemic also appeared to have derailed his post-graduation opportunities “before I got this tap on my shoulder for this opportunity, and I’m glad I took it.”

“I believe I was chosen for my academic record, my character. Once the program was outlined to me by the dean of the business school and the chancellor, I became immediately intrigued. Always be interested.

“It was presented to me as something pure, and once you determine that it is pure, it became something I wanted to be a part of, not just for my career, but for those who follow our path.”

The program is designed to challenge Berry and Swinson to develop relationship skills with not only customers, but local nonprofits and with community initiatives.

The aim is building bridges to promote interaction and trust.

Barksdale said the program is a natural progression out of what Piedmont considers to be its fundamental values: “Be authentic. Build caring relationships. Do what’s right, go all in with commitment. Move forward to maintain progress.”

Barksdale said the bank already was making plans for the program when “an opportunity to exercise our values came this year with the light clearly shown on racism and inequities in our society.”

“We wanted to be more inclusive in our hiring and in our practices, and how can we address systemic racism.”

Barksdale said that providing funds toward socioeconomic initiatives in the community is valuable, but it is also somewhat of an “easy way out.”

“We’re not going to hire a ton of people given we’re a small company with about 120 employees. But we can identify talent, develop them and employ those that we can.”

Piedmont is not alone in emphasizing minority recruiting and talent-development initiatives.

Truist said part of its social responsibility pledge is promoting diversity and inclusion.

Truist chairman and chief executive Kelly King is a signatory of the CEO Action for Diversity & Inclusion pledge to address racism in the workplace.

One example is Truist’s commitment to increase the number of racially and ethnically diverse employees among senior leadership positions from 12% to at least 15% by 2024. Truist currently has 1,460 senior leadership members.

Nearly half of Truist’s board of directors “is racially, ethnically or gender diverse, and that women hold key board leadership positions, chairing three of the board’s six committees.”

“We recognize that minorities and women historically have been underrepresented in leadership positions at financial services companies, and we pledge to change that at Truist … and contribute to changing it in our society overall,” the bank said in its report.

Charlie Scharf, who will reach his one-year anniversary as Wells Fargo’s chief executive Oct. 21, said the bank is committed to “doubling Black leadership over the next five years and creating a new and expanded diversity role reporting to the CEO.”

The bank said the company’s senior leadership is comprised of 41% female, and 21% racially or ethnically diverse, including 6% Black.

“The company will aggressively recruit senior managers from outside the company, which will in turn better position Wells Fargo to promote from within for its top leadership roles,” Scharf said.

“Our initiatives are grounded in doing the right things to support progress in our communities and country on the critical issues of racism, justice and opportunities for everyone,” Barksdale said.

“We must be forward looking in our service to all of our neighbors. To do less is to diverge from our values, while also depriving our organization of outstanding young talent from HBCUs and relationships with minority entrepreneurs who are doing so much to grow the economy.”

Barksdale said the initiative also makes good business sense in that it spreads Piedmont’s reach and reputation into underserved communities.

Sun Sep 13 , 2020
HOUSTON – The president of Prairie View A&M University, Dr. Ruth Simmons, has gifted the Fifth Ward community with a major boost in an effort to help a non-profit founded 77 years ago. Simmons presented the Julia C. Hester House, a long-standing community center in the Fifth Ward area, a […] 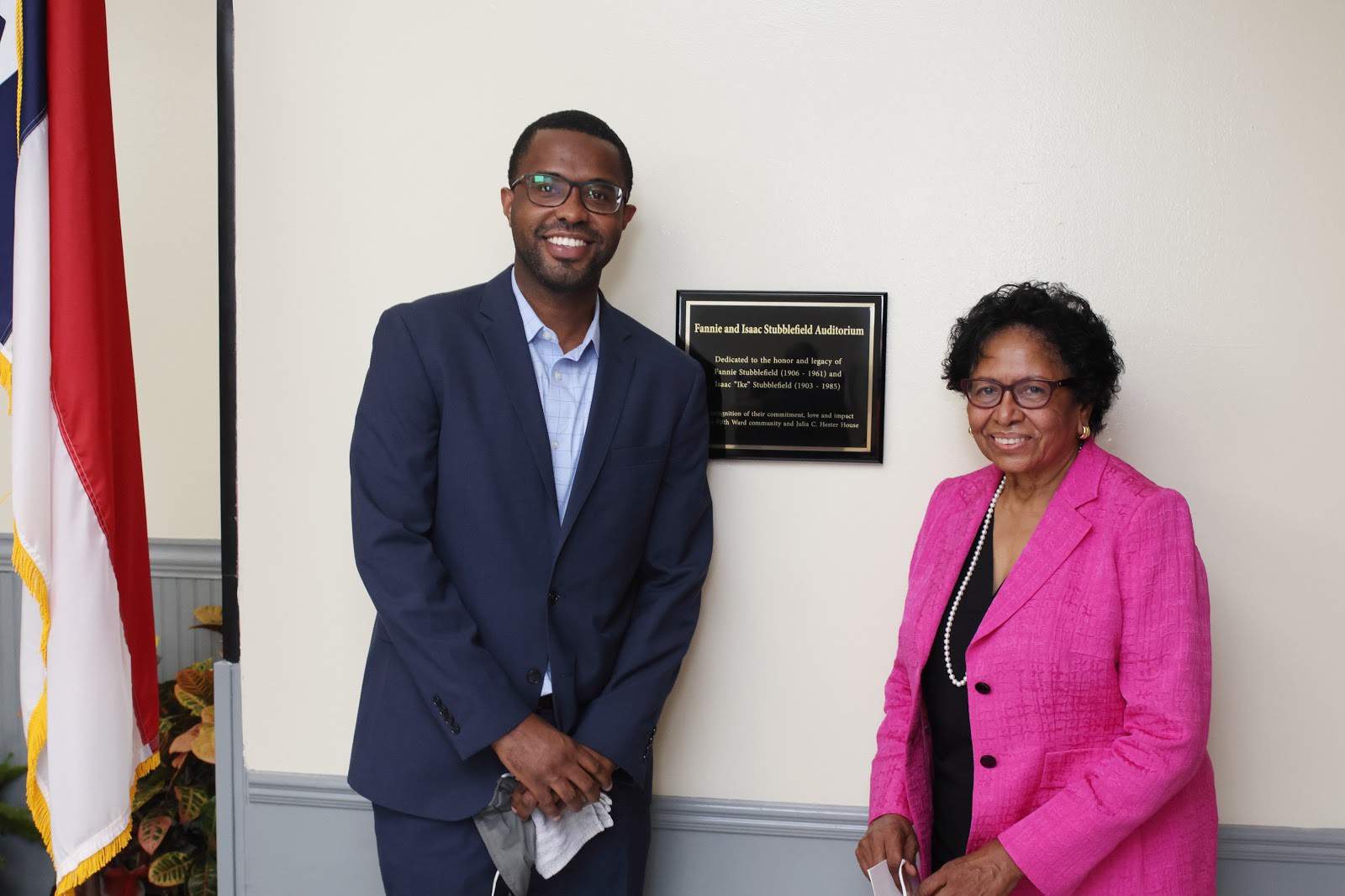