Sign up for our COVID-19 newsletter to stay up-to-date on the latest coronavirus news throughout New York City Each year, on the anniversary of the Sept. 11, 2001 terrorist attacks on the World Trade Center, family members and friends take part in a solemn yet honorable tradition: the reading of […]

Each year, on the anniversary of the Sept. 11, 2001 terrorist attacks on the World Trade Center, family members and friends take part in a solemn yet honorable tradition: the reading of the victims’ names at Ground Zero.

But the COVID-19 pandemic forced the National September 11 Memorial and Museum to forego the live tradition this Sept. 11. They will instead play a recording of the reading as part of efforts to reduce crowd size and maintain social distancing at the Lower Manhattan memorial this week.

While that decision was made “out of an abundance of caution,” it spurred anger from the Stephen Siller Tunnel to Towers Foundation, which insisted on keeping the live tradition going this year.

“We will be reading all 2,977 names of the souls who perished on that day,” said Frank Siller, chair of the nonprofit. “It’s odd that they are not doing it live this year – I really don’t know what they are doing. We felt that with the emotion of that day, the 9/11 families should read every single year – and we are proud to give them that opportunity in a safe way.”

The foundation will set up their own name-reading ceremony a block from the site on Liberty Street and Church Street next to Zuccotti Park, where the organization will allow each and every family member to read the names of those murdered that day in “a safe way.”

In addition, Vice President Mike Pence will be joining the Siller group to honor the names of those killed on that day.

The 9-11 Memorial and Museum will still allow families to visit the memorial site on September 11, with all safety concerns addressed due to the ongoing pandemic and fears of a resurgence of the contagion.

In a statement, the 9-11 Memorial and Museum said: “The reading of the names is at the heart of our mission at the 9/11 Memorial. Given the dangerous health risks associated with large gatherings, we put an enormous amount of thought into how we could hold this year’s event safely. We are committed to a live commemoration that will be as beautiful and meaningful as ever, while also protecting the health and well-being of families. We can and will do both.”

The Stephen Siller Tunnel to Towers Foundation was set up by his brother, Frank Siller, in honor of the  Squad 1 member who ran through the Hugh Carey (nee Brooklyn-Battery) Tunnel on that fateful day to help his colleagues. He perished along with 342 fellow firefighters in the ensuing collapse of the Twin Towers.

The Foundation has since raised millions of dollars thought events like the Tunnel 2 Towers Run normally run in September and the Tower Climb in June, that they use to help fallen First Responders and members of the military killed in action. The foundation has paid off scores of mortgages of families of those lost subsequently in fires, shootings of law enforcement officers and war.

While the 9/11 Memorial maintained it “put an enormous amount of thought” into planning a safe 9/11 commemoration, Frank Siller said it was “easy” to plot out a safe live name-reading. He said readers will approach one at a time, with no more than two at the podium. After each reader leaves, the podium will be cleaned off for the next reader.

Those wishing to read will line up six feet apart with different holding areas and all will be required to wear masks. Hand sanitizer will also be “plentiful.”

“This was not hard to figure out,” Siller said. “Good people died that day and it’s a huge area. There simply is no excuse for it – their one job is to keep that day sacred and it can do in a safe way. Firefighters and cops ran into the building and they figured a way to go in we are proud we are doing it in honor all those perished, and those who perished protecting our country.”

Siller called it “disturbing” that the 9/11 Memorial and Museum opted against a live name-reading. The museum had also initially canceled the annual “Tribute in Light,” but reversed course days later after public outcry over its cancellation. The Tribute in Light will go on as planned at sunset on Sept. 11.

While both major fundraising events have been cancelled due to the coronavirus, Siller said the Foundation is “very solid.”

He said they continue to pay off mortgages of police officers killed in the line of duty, recently helping the family of Tamarris Bohannon was killed in the line of duty in St. Louis. They also paid mortgages for firefighters killed and most significantly, Firefighter Christopher A. Slutman, who was in 2019 while serving as a reservist in the Marine Corps in Afghanistan.

“For every dollar we get, 94 cents goes to programs to help our great heroes, not just in New York, but in Florida, Chicago, Washington, Maryland – we deliver all over the country,” Siller said. “The pandemic hasn’t slowed me down too much, because we can do things in a safe way. Americans are smart people who can figure things out – we don’t have to stop living because of this.”

Tue Sep 8 , 2020
Britain on Tuesday admitted that it may break international law by rewriting parts of its Brexit divorce treaty relating to Northern Ireland, as a top legal adviser’s resignation clouded the latest round of fraught EU talks. Former prime minister Theresa May warned the government was in danger of losing the […] 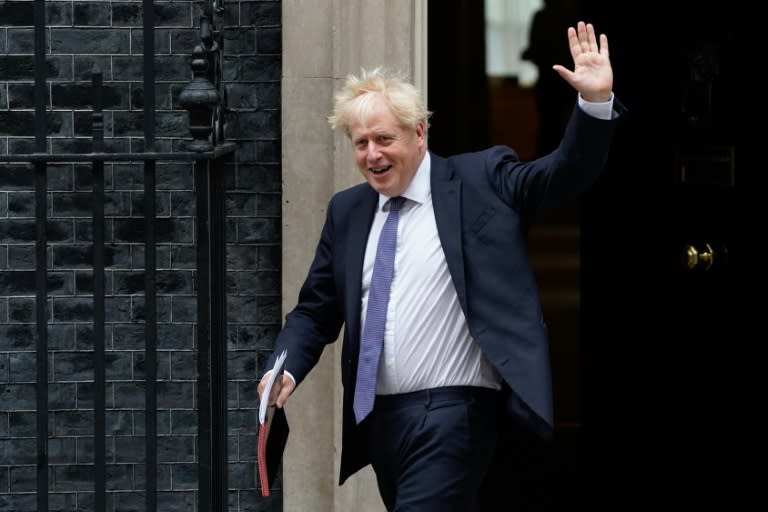