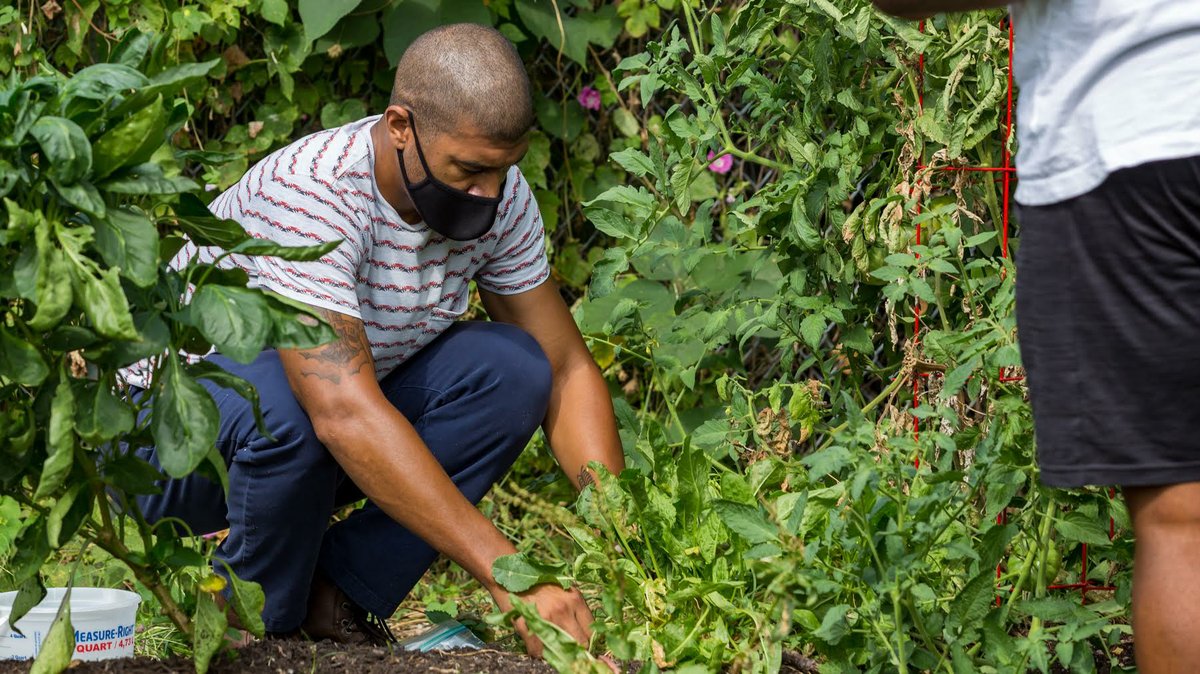 When Nick Speed began working with EarthDance Organic Farm School in Ferguson, he had never worked on a farm before. “It was an amazing experience,” he says about leading tours and field trips through the 14-acre farm. “Here was this opportunity to see what an organic farm looks like, and it doesn’t mean that you’re in the suburbs with cows and pigs. Farms come in so many different sizes.”

This work and Speed’s decision to transition to pescatarian (and later to vegetarian) cultivated his passion for food. He noticed that his body felt better after eliminating meat, and he liked showing farm visitors how they could pick food straight from the ground. Speed began attending conferences on food and noticed that he was the only Black person in attendance. “I knew I had to stay in this lane,” he says. “Representation matters.”

He founded local nonprofit Ujima, which means collective work and responsibility in Swahili, in 2018, to “cultivate community through food justice, environmental stewardship, and youth empowerment,” combining his nonprofit experience with his passion for food justice and taking care of the planet. The organization began by partnering with local companies such as Union Loafers and Earthbound Beer to host pop-up cafés where attendees paid what they were able to for their meal. The pandemic paused the dinners, but Ujima comes together on Saturdays to take care of the gardens at Clay and Columbia Elementary Schools in the St. Louis Public School District.

Now Speed is preparing to launch Project Salsa, Ujima’s latest program, in March 2021. Project Salsa will provide eight months of culinary, agriculture, and entrepreneurship training to underserved high school students through paid apprenticeships. Speed is connected with students at Normandy High School from a previous job but will be doing outreach in North St. Louis City to connect with more potential apprentices. Participants in Project Salsa will grow as many of the salsa ingredients as the season allows. They will then use the ingredients to make jars of salsa to market and sell. It’ll be a hands-on experience from start to finish. “After eight months, we want to have equipped these youth with the tools they need to gain employment, start their own businesses, and grow their own food,” says Speed.

Instead of requiring students to pay to participate, Speed plans to pay them $20 an hour—more than double the minimum wage in Missouri. “Compensating people is an important component of food justice,” Speed says. “Imagine the impact if we radically changed the way we educate the next generation.” Speed launched a GoFundMe campaign on October 5 to fund the apprenticeships. The goal is to raise $30,000, enough money for up to 10 apprenticeships and operating costs.

Long-time chef Robert Rusan will be helping facilitate culinary workshops with the apprentices, and Speed has partnered with Nico Shumpert, who has been working on several recipes for the project, some with a pineapple or mango base and others that are a more traditional spicier tomato salsa. When Speed was debating what product to create, salsa was the obvious choice. “I love tacos,” he says, laughing. “There are also opportunities to sell salsa at farmer’s markets in North County, and there are many different ingredients that tie into agriculture. Salsa is just one of those things that’s universally used.”

They will initially be selling the salsa at A Red Circle Healthy Community Market in Riverview and hopefully at the Ferguson Farmers Market. Speed plans to make the price point affordable so it’s something that’s accessible to all.

Jen Roberts is a St. Louis-based writer. She writes on a variety of topics including arts and culture, travel, and local and global social issues.