© Provided by The Guardian Photograph: Hannah Peters/Getty Images New Zealand’s left-leaning Green party said it would require the financial sector to make annual disclosures about the impact of the climate crisis on their business, if it once again formed a government after October’s election. The policy would be a […]

New Zealand’s left-leaning Green party said it would require the financial sector to make annual disclosures about the impact of the climate crisis on their business, if it once again formed a government after October’s election. The policy would be a world-first, said James Shaw, the climate change minister and co-leader of the party.

“Australia, Canada, [the] UK, France, Japan, and the European Union are all working towards some form of climate risk reporting for companies,” said Shaw in a statement. “But New Zealand is moving ahead of them by making disclosures about climate risk mandatory across the financial system.”

Businesses covered by the requirements would have to make annual disclosures or explain why they had not done so. It is a model based on the taskforce on climate-related financial disclosures framework – formed by the international financial stability board – which is widely acknowledged as international best practice, he said.

Related: Corporations told to draw up climate rules or have them imposed

About 200 organisations will be required to disclose their exposure to climate risk, Shaw said, including large crown financial institutions, such as the country’s accident compensation scheme and the national superannuation fund.

Firms covered by the requirements would have to make annual disclosures covering governance arrangements, risk management and strategies for mitigating any climate change impacts, said Shaw. If they were unable to disclose, they would have to explain why.

Those covered by the proposed law include all registered banks, credit unions, building societies, managers of investment schemes, and licensed insurers with total assets of more than NZ$1b NZD. It would also cover all equity and debt issuers listed on the NZX.

That would include 90% of assets under management in New Zealand within the disclosure system, said Shaw.

Joseph Stiglitz, a Nobel laureate in economics, praised the policy in a video statement supplied by the Green party.

“Many large businesses in New Zealand do not currently have a good understanding of how climate change will impact on what they do,” said Shaw. “The changes I am announcing today will bring climate risks and resilience into the heart of financial and business decision making.”

The plan faces practical hurdles – New Zealand’s parliament has dissolved ahead of the 17 October election, so the scheme is a campaign pledge, rather than a policy set in motion. In order for it to become a reality, the Greens, a minor party, would need to form part of a coalition government after the election – they are currently part of a ruling bloc with centre-left Labour.


Their proposed law would then require approval by a majority of parliament.

The climate risk reporting would begin in 2023 at the earliest.

Thu Sep 17 , 2020
Technavio has been monitoring the warehouse management systems market and it is poised to grow by USD 1.21 billion during 2020-2024, progressing at a CAGR of almost 9% during the forecast period. The report offers an up-to-date analysis regarding the current market scenario, latest trends and drivers, and the overall […] 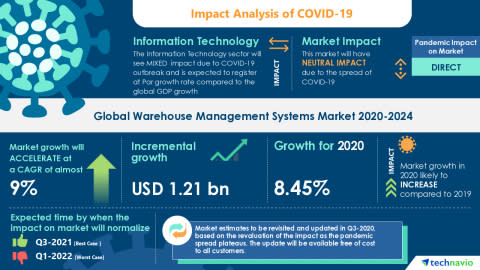