Jonny Howson’s goal was his first for Middlesbrough since February 2019 Middlesbrough marked Neil Warnock’s 1,500th game in management by beating Barnsley to claim a first Championship victory of the season. Warnock – eighth on the all-time list of managers with most games – returned to the dugout for the […]

Middlesbrough marked Neil Warnock’s 1,500th game in management by beating Barnsley to claim a first Championship victory of the season.

Warnock – eighth on the all-time list of managers with most games – returned to the dugout for the milestone after a bout of coronavirus forced him to oversee Boro’s past two games from home.

Jonny Howson gave Boro the lead on the stroke of half-time, turning in George Saville’s knockdown from close range after Marcus Tavernier’s 30-yard free-kick crashed off the crossbar.

Chuba Akpom doubled the lead after the break, following up after Brad Collins spilled a Tavernier shot, before Cauley Woodrow’s late penalty ended Barnsley’s wait for a first league goal of this season.

Barnsley, whose boss Gerhard Struber is the subject of a formal approach by Major League Soccer side New York Red Bulls over their head coach vacancy, had not found the net in their first three games.

Their only point came from a goalless draw with newly-promoted Coventry last weekend and they failed to register a shot on target from open play at The Riverside, although midfielder Alex Mowatt twice curled narrowly over.

Only Middlesbrough (48) scored fewer goals than Barnsley (49) in the second tier last season, but the hosts had by far the greater cutting edge on this occasion.

They should have led long before Howson’s opener, but Akpom fired wide when in one-on-one, Collins saved a Saville diving header and Sam Morsy’s 20-yarder deflected in, only to be ruled out because Akpom was offside.

Warnock had to endure a nervy five minutes of stoppage time after Howson was adjudged to have clipped Woodrow in the box and the striker converted the spot-kick, but Boro held out for a first league win at home since December 2019.

“It’s not been the same watching it on the internet – I need to be able to cajole my players quietly and softly. To get that win was so important with the two-week international break coming up.

“We have played well all season, but we have given silly goals away. It was nice today even though we gave the penalty away. We deserved the win and should have scored more goals.

“We knew Barnsley would have possession but we were happy with that as long as they didn’t hurt us and I thought we defended well, we were organised and then when we won the ball we always looked a threat going forward.”

“We miss the right timing with forward runnings, we do not score at the right time and it is too easy for the other team to get goals.

“But we never give up and I see my team will fight until the last second. But I can see in every game that we need more punch in the last third. This is the big issue at the moment.

“We need an attacking player or a striker, I think everyone knows that. This is necessary for the whole team, for their confidence and conviction. We work so hard but we need more quality.”

Opinion: What a Nonprofit Learned Giving Away $2 Million During the Pandemic

Tue Oct 6 , 2020
Share This Article: A Jewish Family Service of San Diego staff member arranges freshly frozen meals for distribution during the pandemic. By Beth Sirull It has been more than six months since the original shelter-in-place order. Back in March, many of us thought we would be working at home for […] 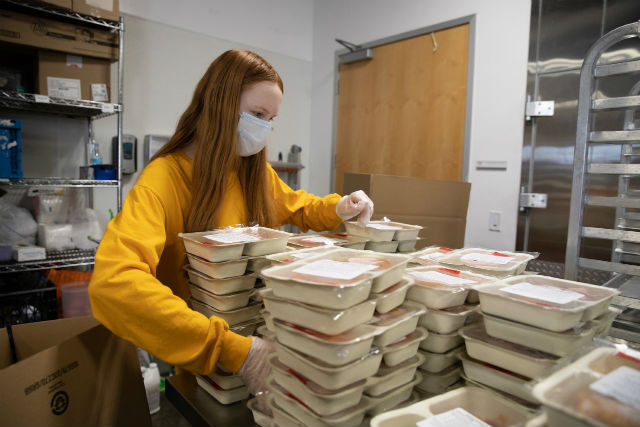