Michel Barnier has told EU ambassadors he believes a trade deal with the UK can still be agreed despite mounting tensions between the two sides after Boris Johnson accused the bloc of being ‘abusive’ during talks.  The EU’s top negotiator is said to have informed diplomats from the bloc’s 27 […]

Michel Barnier has told EU ambassadors he believes a trade deal with the UK can still be agreed despite mounting tensions between the two sides after Boris Johnson accused the bloc of being ‘abusive’ during talks.

The EU’s top negotiator is said to have informed diplomats from the bloc’s 27 member states at a meeting yesterday that he still remained hopeful of a deal being done but that the coming days will be decisive.

One source with knowledge of the meeting told the Reuters news agency that ‘Barnier still believes a deal is possible though the next days are key’.

A second diplomatic source said ‘the hope is still there’ while a third insisted Mr Barnier had ‘stressed he will keep negotiating until his last breath’.

Relations between the two sides have become increasingly strained in recent days after Mr Johnson announced his intention to tear up parts of the Brexit divorce deal, a move which ministers have admitted will break international law.

Mr Johnson today risked worsening the row as he said his proposals to override the Withdrawal Agreement were necessary in order to prevent the EU from pushing an ‘abusive or extreme’ interpretation of what was agreed in the accord struck last year. 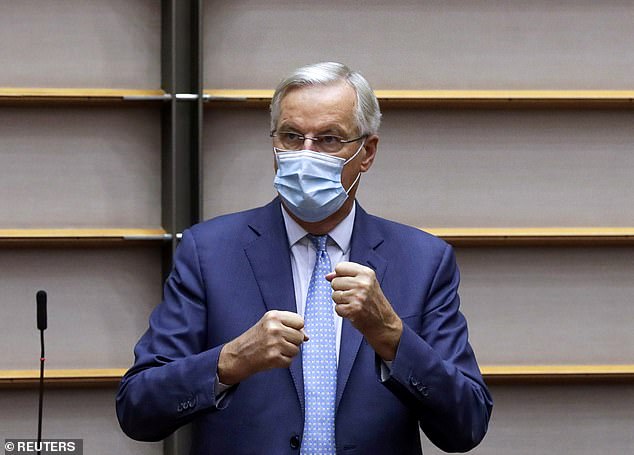 Michel Barnier, pictured in Brussels yesterday, is said to have told EU ambassadors that he still believes a trade deal with the UK is possible 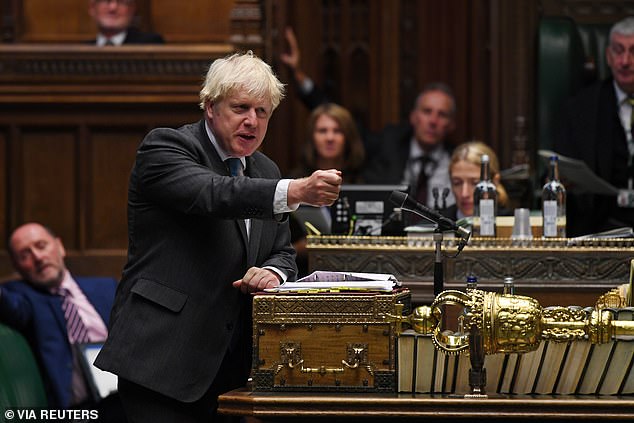 The Government sparked a furious row with the EU after it published its UK Internal Market Bill last week.

The legislation will enable the UK to unilaterally make decisions on key issues, like customs arrangements between mainland Britain and Northern Ireland, contained within the Withdrawal Agreement.

Brussels is adamant that the decisions must be made by a joint committee made up of people from both sides – as set out in the treaty.

But the Government argues its proposals are necessary in order to protect the integrity of the UK should the two sides be unable to agree terms.

The EU has given Mr Johnson until the end of the month to withdraw the plans or face legal action, with Brussels also warning that a failure to perform a U-turn will collapse trade talks.

But the Government is adamant it will not be backing down with Mr Johnson telling The Sun the Bill is needed in order to put in place ‘watertight bulkheads that will stop friends and partners making abusive or extreme interpretations of the provisions’ contained within the Withdrawal Agreement.

Mr Johnson has also accused the EU of negotiating in bad faith.

Brussels today signalled it is standing firm on its demand for the PM to drop his plans.

Eric Mamer, chief spokesman for the European Commission, told a press briefing: ‘We have as you know set out a position extremely clearly, it is in our statement, and it relates to those clauses being withdrawn from the law.

‘That position has not changed and we have asked the UK to do this at the earliest possible convenience, and by the end of September at the latest. That has not changed.’

The spokesman also insisted the EU carries out all of its negotiations in ‘good faith’.

Trade negotiations remain ongoing ahead of the end of the Brexit transition period in December but the chances of a breakthrough appear slim after months of deadlock.

Ursula von der Leyen, the President of the European Commission, said yesterday: ‘With every day that passes, the chances of a timely agreement do start to fade.’

Tory rebels had put forward an amendment to the Bill to give Parliament a veto on any attempt by the PM to depart from the terms of the divorce accord.

The Government last night caved in on the issue in order to avoid a damaging rebellion.

Ministers and the rebels have agreed to change the Bill so that MPs will get a ‘parliamentary lock’ on overriding the Withdrawal Agreement.

Any plan to move away from the divorce deal will have to be backed by MPs in a vote in the House of Commons before the PM can go ahead with it.

The Government this afternoon published the details of its compromise, saying that Parliament will be asked to support the use of the powers if the UK believes the EU is guilty of a ‘material breach of its duties of good faith or other obligations’ which undermine the Northern Ireland protocol.

It provided a number of examples of what such behaviour could be, including Brussels insisting on paperwork having to be filled out to send goods from Northern Ireland to Great Britain or refusing to designate the UK as a third country for ‘unreasonable or poorly justified reasons’.

The latter move would effectively amount to the EU banning the export of UK agricultural goods into the bloc.

The Government also confirmed it will ‘always activate appropriate formal dispute settlement mechanisms with the aim of finding a solution’ and that this would happen in ‘parallel’ with using the powers to override the divorce deal.