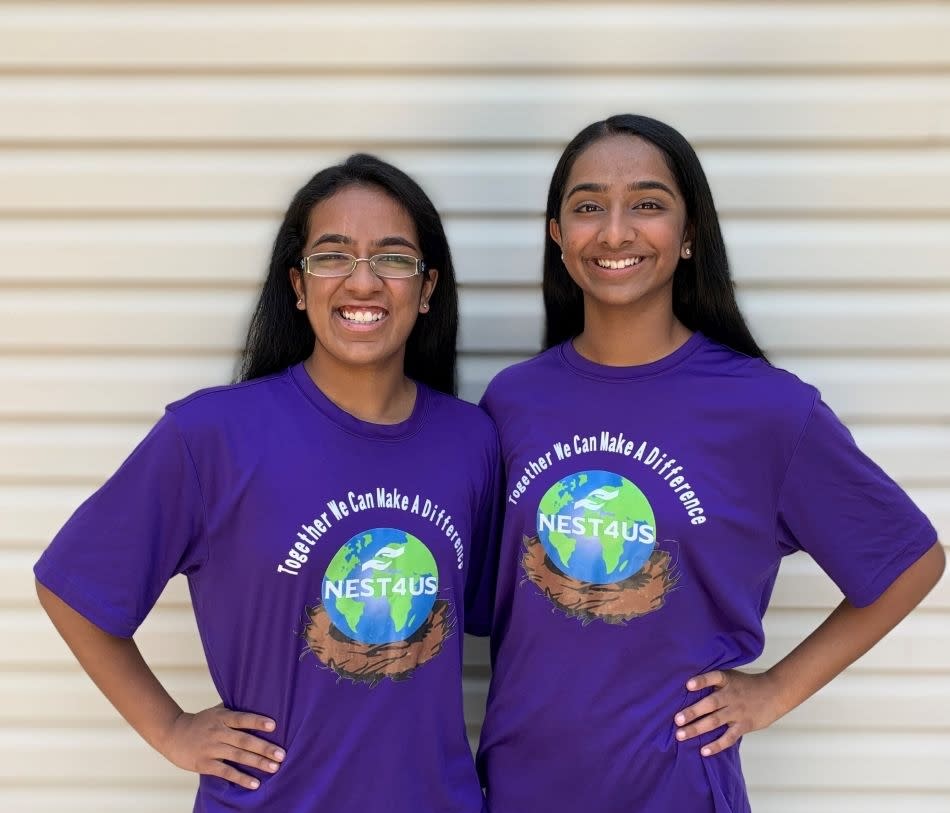 ASHBURN, VA — Two Ashburn sisters will be receiving a top honor from former President George H. W. Bush’s Points of Light nonprofit group on Saturday for their work as founders of NEST4US, a nonprofit organization the sisters founded four years ago that is dedicated to volunteering and making the world better through kindness.

Shreyaa Venkat, 17, and Esha Venkat, 14, had been volunteering with their parents for as long as they can remember. They witnessed the good work, through their family’s volunteer efforts, that was going on in Virginia, Washington, D.C. and Maryland to help the homeless and underserved communities.

At the ages of only 13 and 10, Shreyaa and Esha believed their efforts to help others in the community could be even more powerful if they recruited their friends and the community. That is when the sisters decided to create NEST4US, which stands for Newer Environment Starts Today.

Through their organization, people of all ages and backgrounds can take advantage of the organizing structures created by the sisters to give back to the community. “Our volunteer team, we think of them as our family, and we want to be that family, or nest, for those without one,”Shreyaa said in an interview with Patch.

On Saturday at 8 p.m., the two sisters will be presented with the prestigious The George H.W. Bush Points of Light Award.

The sisters will be honored alongside business leader Hamdi Ulukaya, founder and CEO of Chobani and founder of Tent Partnership for Refugees. Marc Benioff, co-founder, chair and CEO of Salesforce, and his wife Lynne Benioff who co-owns Time magazine with her husband, also will be honored.

All four former living Presidents — Jimmy Carter, Bill Clinton, George W. Bush and Barack Obama — will serve as honorary chairs for the virtual celebration. The event, co-hosted and co-chaired by Barbara Bush, Jenna Bush Hager and cousin Wendy Stapleton, will be livestreamed at 8 p.m. on Saturday.

When the sisters received a phone call this summer that they would be receiving the Points of Light Award, they were shaking with excitement, said Shreyaa, who is a freshman at Georgetown University. Esha goes to Broad Run High School in Ashburn.

The sisters emphasized that they had not applied for the award. They had not sought out the recognition.

“It’s such a privilege. We are so grateful to Points of Light,” she said. “We really want this to inspire other youth in the community to believe that they can make a difference.”

Shreyaa and Esah said their parents, who had instilled in them the importance of community service, were so excited about the award. “We wouldn’t be where we are without them,” they said. “We get so excited when we’re able to make them proud. That’s the main thing. Seeing how their faces light up.”

Among the initiatives of NEST4US are NEST Tutors, NEST Buddies — which provides birthday boxes for underprivileged kids— and NEST Kares, which provides free school supply kits for low-income families and care packages for the homeless.

Those care packages, called Blessing Bags, are one of the organization’s signature initiatives, and the teens now have a large community of volunteers helping to put them together and hand them out. Esha explained that all of our bags contain a note of encouragement, including messages such as “Know you’re loved and appreciated” and “You’re not alone, we’re with you.”

Since the start of the coronavirus, Shreyaa and Esha have had to scale down the size of the groups that put together the care packages. But NEST4US is still going strong through the pandemic.

While they are grateful for every recognition and award, the George H.W. Bush Points of Light Award is on a “whole different level,” Shreyaa said. “Being recognized in front presidents and among distinguished honorees — that itself is such a huge privilege,” she said.

When asked how they find the time to run a large nonprofit organization — NEST4US now has 1,000 volunteers and several programs — while going to school and just being teenagers, the sisters said they get that question all the time.

“What are some things that people do for fun? Watch movies or hang out with friends. People block out time in their schedules for those things,” Shreyaa explained. “Why can’t you do that for community service? It’s easy, it’s fun and you get to connect with new people while helping people in need.”

The sisters also block out times in their lives for sports and physical well-being. Both of them play soccer and each of them takes karate at a local martial arts center. Esha is a 2nd degree black belt, while her older sister is a 3rd degree black belt.

When it comes to NEST4US and their lifelong focus on giving back to the community, the sisters emphasized that people “should make the time to help others.”

This article originally appeared on the Ashburn Patch