Deleveraging Target Seems Reasonable… Previously I discussed why GEO Group (GEO) should reduce its dividend to focus on deleveraging. On the Q2-2020 earnings release, GEO reduced its quarterly dividend from $0.48/share to $0.34/share. More importantly, GEO announced that it anticipates to repay $100 million in debt and quantified $50-100 million […]

Previously I discussed why GEO Group (GEO) should reduce its dividend to focus on deleveraging. On the Q2-2020 earnings release, GEO reduced its quarterly dividend from $0.48/share to $0.34/share. More importantly, GEO announced that it anticipates to repay $100 million in debt and quantified $50-100 million for annual debt repayment starting in 2021. Leaving aside whether this initial effort is enough or not, this is a good first step to take and the deleveraging targets look reasonable to me.

The new dividend rate is going to save GEO about ~$34 million in FY2020 (~$68 million run rate but the dividend cut is at the half year point). Some non-core asset sales should help make up the difference to meet the $100 million FY2020 debt paydown target. With less than five months left, assuming the management is not blindly confident, I’m going to give GEO the benefit of the doubt on the $100 million paydown. In addition, the CEO openly talked about $100 million in gross proceeds from asset sales on the Q2 earnings call.

For FY2021 and onward, the $50-100 million deleveraging target also seems reasonable assuming a sweeping Democratic win having a large but not devastating impact on the business. The $300-400 million EBITDA range captures what GEO did during the second half of Obama’s period (for reference, GEO generated $420-$480 million in FY2017 to FY2019). GEO should be able to throw out roughly $nil to $100 million free cash flow post dividend payment assuming a dialed down capital program.

Other factors that give me confidence in the deleveraging target are (1) the CFO confirmed that there is still room to cut the dividend further while maintaining the REIT status and (2) there’s nothing preventing GEO from following CoreCivic’s (NYSE:CXW) de-REIT strategy if they need to stop the dividend all together.

But the Love for Dividend Misses the Point

What’s concerning is the CEO’s obvious reluctance to reduce the dividend and his confusion about what dividend represents:

Leaving the dividend irrelevance theory out of this discussion, instead just compare the market cap reduction since FY2014 (almost $3.0 billion vs. today ~$1.34 billion) to the cumulative dividends paid, one interpretation is that the market has treated the dividend as a return of capital as opposed to return on capital. In other words, the market isn’t rewarding GEO for paying a single dollar of dividend since FY2014.

While it’s great that the CEO wants to protect the dividend and owns a meaningful stake in the company, equity value exists only if the creditors are taken care of first. I fully acknowledge the information asymmetry between myself and the management team, but I still think it’s prudent to cut the dividend to the minimum for this year, get clarity on the election, and then decide what to do with the saved up liquidity.

Nonetheless, I think the management has laid out a feasible deleveraging target for the near term and I applaud them for shifting the focus to the balance sheet (although not to the degree that I’d like to see).

First, I still think GEO’s stock is uninvestable. While I agree there’s substantial upside if Trump gets re-elected, I generally try to avoid binary bets with no edge. Besides, I think the dividend might get cut further or GEO could even follow CoreCivic’s de-REIT strategy, so there’s likely further selling from dividend investors. More senior capital structure instrument provides equity-like return anyway (i.e. +10%). 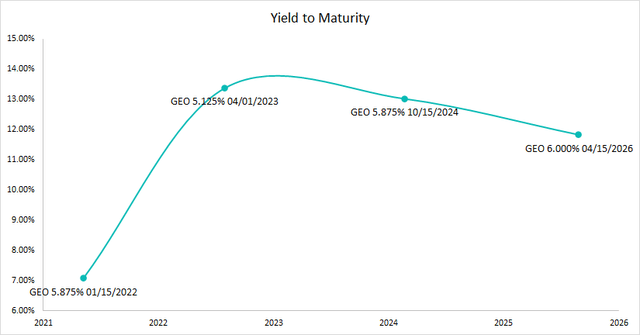 I think the most effective way to lean on the refreshed deleveraging focus is to buy the 5.125% 2023 senior unsecured notes. Looking at the term structure of GEO, it’s clear that the 2022 notes trade apart from the rest of the pack. This is because the company has repeatedly said that they will use their RCF to take out the 2022 notes, which is feasible as long as they don’t trip over the senior secured leverage of 3.50x covenant test. My opinion is that GEO is unlikely to follow through with this strategy to take out the 2022 notes. Taking the low-end of guidance, the senior secured leverage will finish around ~3.0x, so in theory GEO has the capacity to put the balance on the RCF (0.5x turn on ~$400 EBITDA equals $200 million of additional secured debt capacity), but it’s going to be very tight. Unless the business improves dramatically, it makes little sense to max out on the RCF and run the risk of technical default. In short, I think the market is giving too much credit to the take-out story on the 2022 notes.

Based on my opinion that the 2022 notes isn’t likely to be taken out soon, buying the 2023 notes is essentially the same bet while the return potential almost doubles. I think in the world post 2020 election, either GEO can refinance the 2022 and 2023 notes without throwing the kitchen sink to clear the maturity runway, or GEO will be heading for something much worse (in which case owning the lower-dollar bond is more beneficial). If GEO ends up needing to throw the kitchen sink at the debt maturity wall, it still has the de-REIT strategy in its back pocket and the 2023 notes should benefit as only taking out the 2022 notes buys merely one year of maturity runway.

Compared to the 2024 and 2026 notes, it makes little sense that the 2023 is yielding higher as all four series of senior unsecured bonds are pari passu to the best of my knowledge. Maybe there is a temporary supply and demand imbalance, maybe the market isn’t paying attention, maybe it’s difficult to arbitrage – whatever the root causes, the 2023s is trading at a undeserving yield premium (i.e. price discount) vs. the longer-dated 2024 and 2026 notes in my opinion.

What If I’m Wrong?

The most obvious risk is a sweeping Democratic win and the government and the legislative body join forces to eliminate the private prison industry all together. I think there are a few hurdles to making this a reality. First, I’m no election expert but it seems like the Senate is still up for grab. Second, practically speaking, there must be a minimum level of demand for private prisons and phasing out private prisons will take some time. Lastly, where is the money for building new Federal prisons going to come from? This cannot be a budget priority with everything that’s going on right now. So I expect the transition phase to take many years.

Another key point to remember is that not all private prisons are created equal. The Federal government can only directly impact the Federal Bureau of Prisons business (~13.6% of revenue for GEO YTD 2020 per investors presentation), and it can’t directly impact U.S. Immigration & Customs Enforcement (21.6% of revenue), US Marshals Service (11.1% of revenue), and any of the state-level facilities (ranges from 0-3.5%). Taking a 15% haircut on the ~$2.3 billion revenue and assuming an average ~17.5% EBITDA margin, GEO should still generate ~$350 million EBITDA, which is the mid-case of my assumption for 2021 and onward.

Another big risk factor is a prolonged COVID-19 situation preventing occupancy level from normalizing. As a reminder, a major portion of GEO’s business has a minimum take-or-pay feature (70% of revenue is the number cited by the CFO on the most recent earnings call).

GEO is taking a good first step at managing its leverage. While the magnitude is less than what I hoped, this creditor-friendly behavior shouldn’t go unnoticed. In fact, I think the GEO’s senior notes are attractive at current levels and the 2023 notes is the most compelling investment. There are some obvious risks associated that can’t be controlled by GEO, but I think the risks are much longer-dated than the 2023 notes maturity.