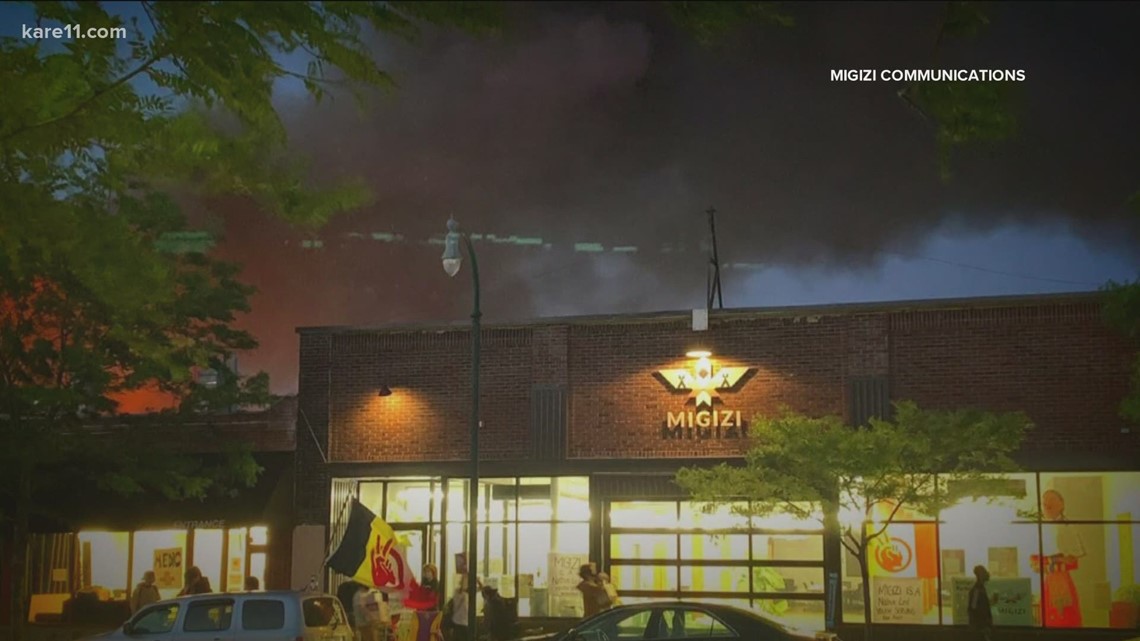 After a fire destroyed MIGIZI headquarters this summer, the non-profit raised more than $2 million in donations and vows to rebuild.

MINNEAPOLIS — It’s been a tough year for a Twin Cities non-profit that was instrumental in the adoption of Indigenous People’s Day in Minnesota.

MIGIZI, which has spent 45 years lifting up Native American youth, has spent the last few months trying to lift itself from the ashes of a fire that destroyed its base of operations. Now, thanks to more than $2 Million in donations from across the world, the mission continues.

Melissa Olson, development and program administrator for MIGIZI Communications, spoke to KARE11’s Kent Erdahl about the last year and what it means on such a special day of the year.

Kent Erdahl: “First, what is MIGIZI?”

Melissa Olson: “MIGIZI Communications is a non-profit organization that trains youth and young adults in media and green jobs.”

Kent: “What was this space, this empty lot, where we are standing?”

Melissa: “This was a space that MIGIZI had just newly renovated for its programming. It was a space for young people in this community. It had only existed for about a year but it had housed all of MIGIZI’s programs.”

Melissa: “So just after the 3rd Precinct burned down, after Geroge Floyd was killed by police, all of this neighborhood succumbed to fire. MIGIZI was spared that first couple of days. Our executive director was here and she had called upon members of the American Indian Community, the American Indian Movement, to come and safeguard the building as much as possible. It was only because there was proximity fire from these buildings here to the north and this post office to the south that some of those flames jumped on to the roof and the building caught fire.

Kent: “What happened next?”

Melissa: “The next morning the community really rallied around, there was just a lot of outreach. People came from across the Twin Cities just to help clean up. Right away, MIGIZI held a community healing event to talk about what had happened and what it means to have to try and cope through that kind of event.

“Over the course of this summer MIGIZI did get on its feet and, without a building, decided it would continue summer programming for youth here in the community. Through everything; the pandemic, in the wake of what’s happened with the unrest, it’s really important to find a way to work together and be in community.”

Kent: “On this indigenous people’s day, as you look out at this empty space. What comes to mind?”

Melissa: “Many of the people who started MIGIZI communications were instrumental in starting indigenous peoples day. Somebody was there in Geneva, Switzerland in 1977 when indigenous people’s day was first declared. We took some of those slides and those photos out of this building and out of this fire and it survived, so we get to continue to tell those stories.

RELATED: What is Indigenous Peoples Day? And what happened to Columbus Day?

“This was an important building it was a beautiful building but, at the same time, it was just a building. The organization and its story, I think, remains really strong.”

In the wake of the fire, MIGIZI has generated more than $2 million in donations from the public. The community has also rallied around the organization to literally keep the flame of hope alive.

On the night of the fire, a community member captured a flame from what was left of the burning structure. They then walked over to Holy Trinity Lutheran Church and asked if the congregation would help keep the flame going until MIGIZI can rebuild and reopen.

“We have seven households, currently, that are tending the flame. We each keep it for two weeks,” said Holy Trinity member, Lynda Nordholm. “It goes deep. It’s real. It’s true. It represents taking the flame that still was alive after the rioting. Keeping that going so that this community, the MIGIZI community and native people can come together to share in the goodness when it’s returned to them.”

OTHER NEWS: Survey: 29% of Minnesota’s educators are considering quitting

OTHER NEWS: More small Minnesota communities are going ‘mail-in only’ this year due to COVID-19