Text size Uldis Zile/Dreamstime The systemic risks posed by climate change are not partisan, or even political. They are financial. They are real, material, systemic risks for Wall Street, Main Street, and everywhere in between. This is not about scoring political points or boosting a particular industry. It’s about ensuring […]


The systemic risks posed by climate change are not partisan, or even political. They are financial. They are real, material, systemic risks for Wall Street, Main Street, and everywhere in between. This is not about scoring political points or boosting a particular industry. It’s about ensuring the stability and security of our economy—and safeguarding it for the people whose lives and livelihoods depend on it.

Much attention will be paid to the presidential election in the coming weeks, but let us remember that, regardless of the outcome, financial markets have a critical role to play in addressing climate change. Financial regulators like the Federal Reserve and the Securities and Exchange Commission must heed the calls of capital market leaders. They must listen to the science, listen to the economists and listen to the financial experts sounding the alarm bells. Then, they must move swiftly to ensure they steer our economy away from the climate cliff.

Today, for the first time ever, an expert subcommittee of a federal financial regulatory agency issued a major report on climate risk, recommending that the Commodity Futures Trading Commission, the Fed, the SEC and other financial regulators act swiftly to address climate change as a systemic financial risk.

The report, “Managing Climate Risk in the U.S. Financial System,” was produced by the Climate-Related Market Risk Subcommittee of the CFTC, on which I serve. It issues specific recommendations for action, including putting a price on carbon, strengthening climate risk disclosure and conducting stress tests to see how financial institutions like banks might fare in a carbon constrained, rapidly warming world.

In June, the Ceres Accelerator for Sustainable Capital Markets issued its own report outlining the systemic threat climate change poses to capital markets, along with more than 50 recommendations financial regulators should take to combat this threat.

In July, investors with a collective $1 trillion in assets under management joined with former members of Congress from both major political parties to demand that financial regulators heed the report’s recommendations and address climate change as a systemic financial risk.

“The adverse impacts of climate change are already stressing key sectors of our economy,” David Jenkins, President of Conservatives for Responsible Stewardship, said in an endorsement of the June report. “The risks are real,” former Republican
Rep. Carlos Curbelo
(R-Fl.) told the New York Times. “We need leadership from every U.S. financial regulator to transition to a resilient, sustainable, low-carbon economy and avoid a climate-fueled financial collapse,” California Comptroller Betty Yee wrote in Barron’s.

In August, Sen. Elizabeth Warren (D-Mass.) sent a letter to SEC Chairman
Jay Clayton
, urging him to act on climate change as a systemic risk and to require that publicly traded companies provide climate risk disclosure, among other recommendations.

Her colleagues in the Senate issued a major climate report, with significant emphasis on the role financial regulators must play in avoiding severe climate risks to the U.S. economy. They, too, called for mandatory climate risk disclosure, stress tests for banks and cooperation from U.S. financial regulators with their global counterparts who are already engaging on climate change.

We’re nearing an inflection point. The CFTC subcommittee, made up of experts representing financial institutions, banks, insurance companies, data service providers and environmental and sustainability organizations, issued a clarion call this week to financial regulators based on the real-world impacts and risks of climate change.

That this recommendation for financial regulatory action has come from across the spectrum is a testament to the leadership of CFTC Commissioner
Rostin Behnam
, sponsor of the subcommittee, and Chair Bob Litterman. But it also shows just how extensive and serious a financial issue climate change is to our economy and our society—and that we urgently need action from our financial regulators.

Mindy Lubber is the CEO and president of Ceres, a sustainability nonprofit.

Sat Sep 12 , 2020
BOSTON, MA – SEPTEMBER 9: A first grade student checks to see if it’s his turn into the boys room as … [+] others wait their turn next to hand sanitizer at South Boston Catholic Academy in South Boston on Sept. 10, 2020. Limited students are allowed in each classroom […] 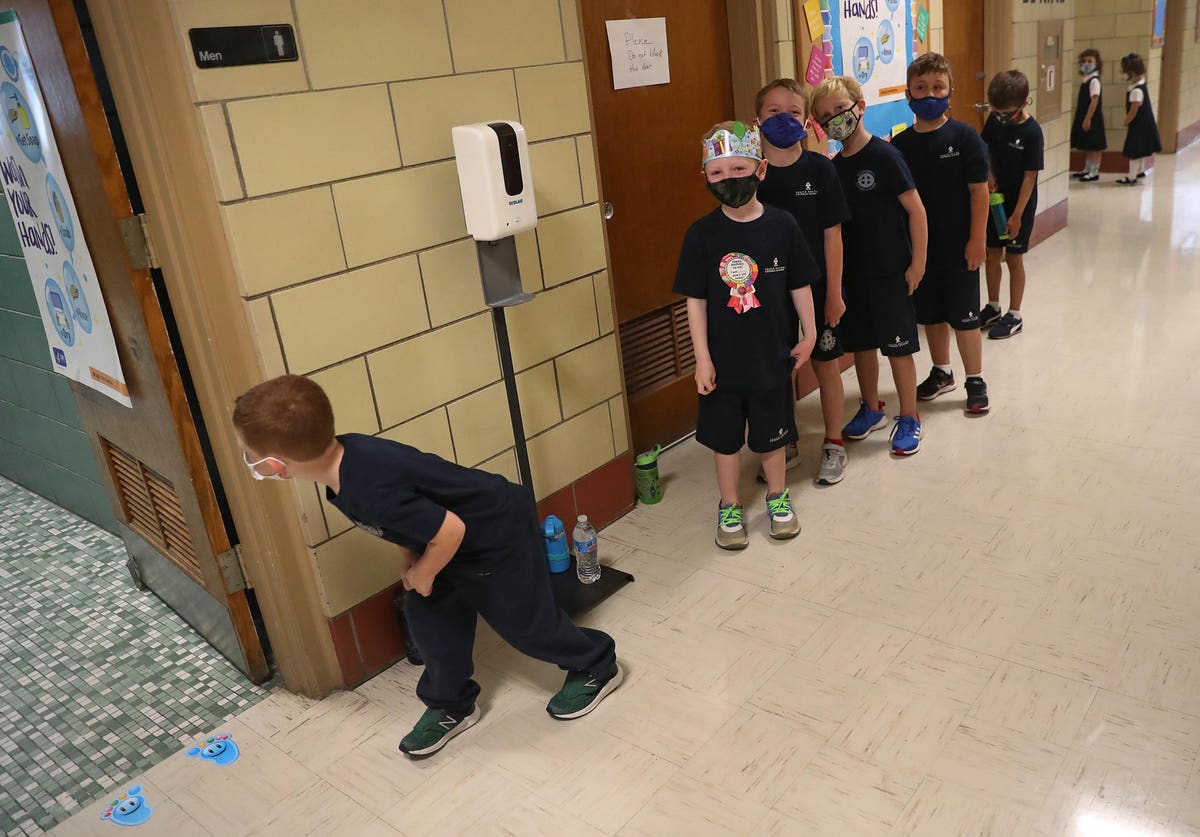