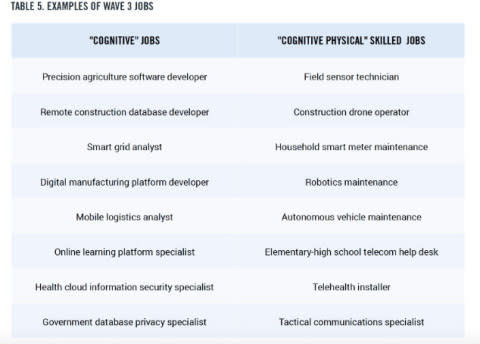 5G will grow jobs, not just in tech, but in sectors across the economy in what would be traditionally considered white- and blue-collar positions

The National Spectrum Consortium and the Progressive Policy Institute (PPI) today unveiled groundbreaking research that finds that the 5G revolution will create 4.6 million jobs through 2034 as part of a new wave of mobility and innovation. Additionally, the study finds that current 5G build-out and engineering activities have created 106,000 jobs as of April/May 2020, helping in a modest way to offset the impact of the COVID-19 crisis.

The Third Wave: How 5G Will Drive Job Growth Over the Next Fifteen Years (Graphic: Business Wire)

The study, conducted by Dr. Michael Mandel and Elliott Long of PPI on behalf of the National Spectrum Consortium, finds that this new wave will create both “cognitive” and “cognitive-physical” skilled jobs across the economy. This includes agriculture, construction, manufacturing, utilities, transportation and warehousing, education, healthcare, and government including defense. By contrast, previous waves of wireless-driven job growth were more likely to be centered in “digital” industries such as entertainment and social networks.

“5G, with its low latency and high throughput, is transforming the world we live in with enormous implications for both technology development and job creation,” said Salvador D’Itri, Chair of the National Spectrum Consortium. “From a technology perspective, 5G is where the network meets the cloud and is changing industry after industry. From an economic perspective, 5G will create 4.6 million 5G-related jobs through 2034 and has already created more than 100,000 new jobs. That’s why it’s so important for the U.S. to remain the global leader on 5G, helping to unleash a new wave of job creation in our nation.”

“The 5G revolution will benefit a far wider set of Americans and regions than previous waves of mobility did,” said Dr. Michael Mandel, Chief Economic Strategist at PPI. “This new wave will create both ‘cognitive’ and ‘cognitive-physical’ skilled jobs, which will be located in nearly every industry and in every corner of our nation. Given the incredible opportunity before us, the federal government should continue to make major investments in 5G and provide job training so that workers can take advantage of these emerging opportunities.”

The paper identifies and outlines three waves of wireless-driven job growth in the U.S., and answers major questions about how many jobs will be created, which industries will be affected, where they will be located and what we can do as a nation to accelerate efforts to meet this challenge.

Wave 1, “The Rise of Wireless,” covers the period from 1990-2007, as mobile carriers were building out the original wireless networks and cell phones went from a rarity to a necessity. Wave 1 generated roughly 200,000 jobs in the wireless industry.

Wave 2, “The App Economy,” covers the period from 2007 to 2019, which was rooted in the application of wireless to mobile apps via smartphones. The App Economy created more than 2.2. million jobs. The main locus of Wave 2 job growth has been in digital industries such as entertainment, finance, communications and social networks.

Wave 3, “The 5G Revolution,” began in 2019 as mobile carriers expanded their initial 5G networks. Wave 3 is generated by the applications of wireless to challenges in physical industries such as agriculture, energy, construction, manufacturing, transportation, education, healthcare and government including defense.

Unlike previous waves, which mostly generated “cognitive” tech jobs which required a college education, Wave 3 is rooted in the physical world. As a result, Wave 3 will also create mixed “cognitive-physical” skilled jobs, many of which fall into the category of installers and maintainers. So while App Economy jobs were focused on software development, Wave 3 jobs will drive job growth in dozens of sectors, across the economy in what we would traditionally consider both white-collar and blue-collar positions.

Where Will Wave 3 Jobs be Located?

In the wake of COVID, the study also looked at short-term job impact as well. It found that current 5G build-out and engineering activities has already created 106,000 jobs as of April/May 2020. The study indexed where these jobs are located across all 50 states. Top 15 locations include Texas, New Jersey, California, Florida, Pennsylvania, North Carolina, New York, Tennessee, Virginia, Colorado, Missouri, Massachusetts, Alabama, Ohio, and Michigan.

The paper identifies four areas where policymakers should focus to harness the full potential of 5G.

The Progressive Policy Institute is a catalyst for policy innovation and political reform based in Washington, D.C. Its mission is to create radically pragmatic ideas for moving America beyond ideological and partisan deadlock. Founded in 1989, PPI started as the intellectual home of the New Democrats and earned a reputation as President Bill Clinton’s “idea mill.” Many of its mold-breaking ideas have been translated into public policy and law and have influenced international efforts to modernize progressive politics. Today, PPI is developing fresh proposals for stimulating U.S. economic innovation and growth; equipping all Americans with the skills and assets that social mobility in the knowledge economy requires; modernizing an overly bureaucratic and centralized public sector; and defending liberal democracy in a dangerous world.

About the National Spectrum Consortium

The National Spectrum Consortium is a research and development organization that incubates new technologies to revolutionize the way in which spectrum is utilized, and 5G is playing a big part in that. Through collaboration between industry, academia, and Government agencies, we solve the toughest problems the nation faces to enable implementation of 5G, 5G based technologies, and spectrum access and sharing. NSC was kick-started through a 5 year, $1.25 Billion, Section 815 Prototype Other Transaction Agreement (OTA) with the Office of the Deputy Assistant Secretary of Defense, Emerging Capabilities and Prototyping (ODASD, EC&P).